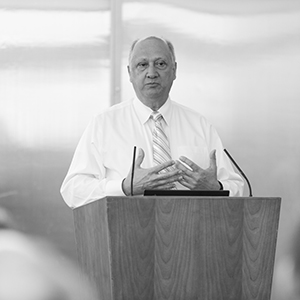 Dr. Rick Pimpinella received his B.S., M.S., and Ph.D. degrees in Physics from New York University Tandom School of Engineering in 1976, 1978, and 1981 respectively. From 1981 to 2001 he was employed with Bell Laboratories, where he pioneered the use of silicon processing technology for the fabrication of optical subassemblies for the passive alignment of optical fibers to photo-detectors and lasers. In 1994, as a Distinguished Member of Technical Staff, he designed and developed a micro-miniature expanded beam optical backplane connector, which was deployed in the US Air Force F 22 Raptor and F35 Lightning II.

In 1998, as Technical Manager, he led the design and development of intelligent remote fiber test systems for monitoring and testing the outside optical fiber cable plant. In 2002, he joined Panduit where he managed for Fiber Business Unit and later, the Fiber Research Department. Dr. Pimpinella is a Panduit Fellow and is actively pursuing his research interests in multimode and single-mode optical fiber, he holds 57 US Patents, and has published more than 50 technical papers and articles.