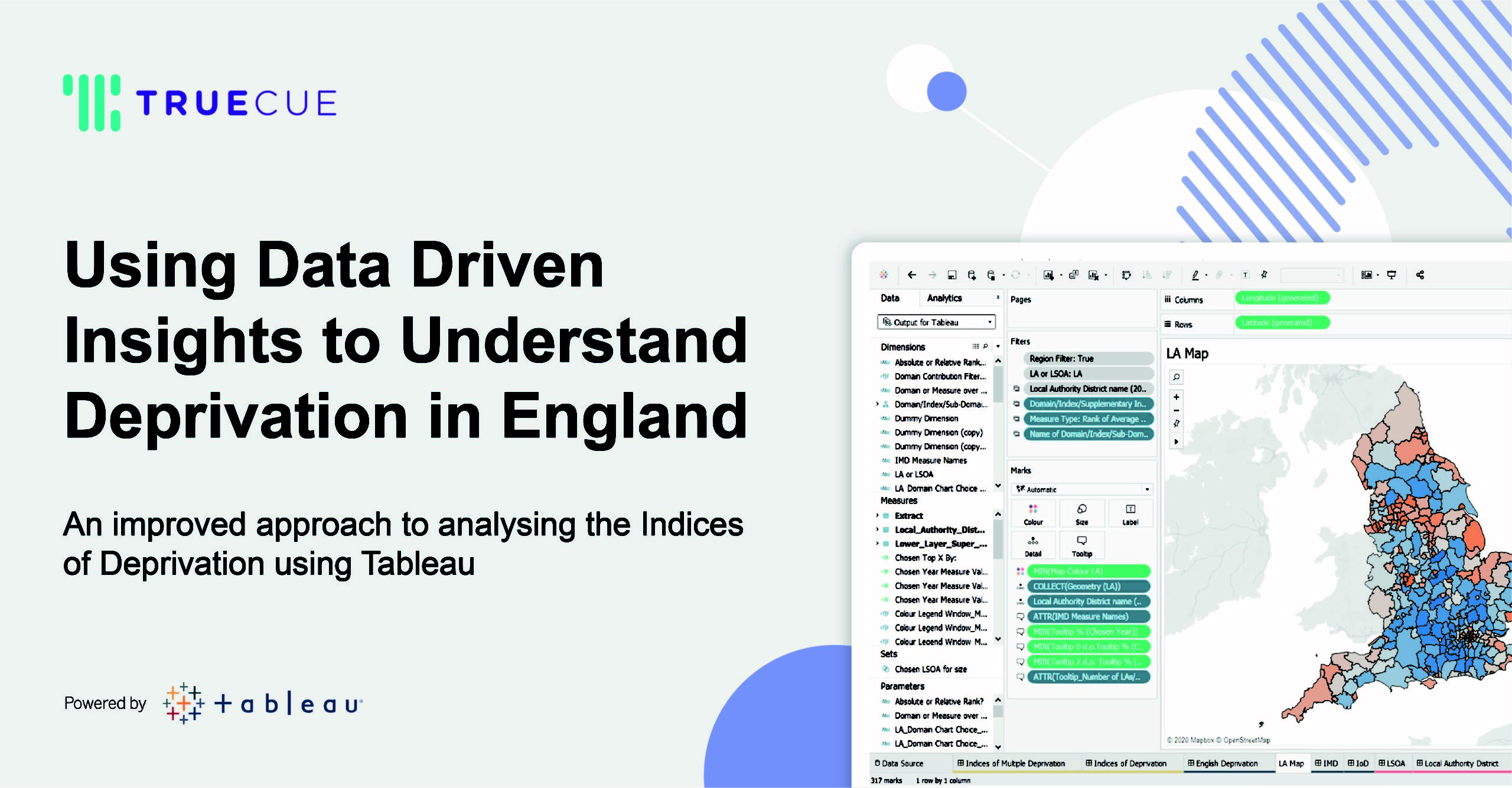 Register here for our 3-part webinar series, starting on 25th February. Join to understand how to use the dashboards, how the data was prepared using Tableau Prep, and how it all came together in Tableau Desktop 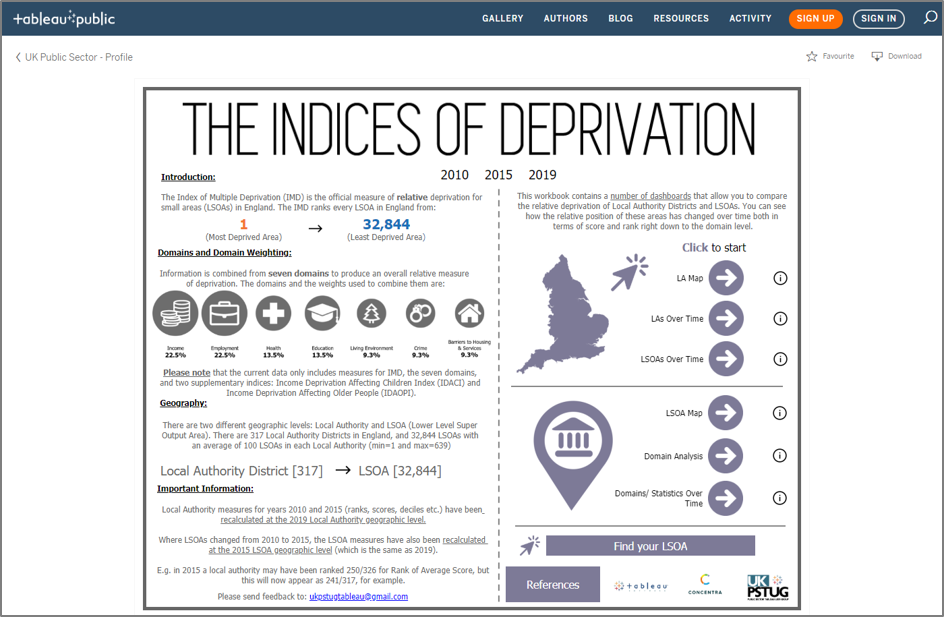 Figure 1 – The dashboards: the landing page on Tableau Public

“People can be said to be deprived if they lack the types of diet, clothing, housing, household facilities and fuel and environmental, educational, working and social conditions, activities and facilities which are customary, or at least widely encouraged and approved, in the societies to which they belong.”

Put simply, deprivation is the lack or denial of something considered to be a norm in the society in which somebody lives.

In England, deprivation is something that Public Sector organisations strive to improve in order to better the quality of life for local residents. This can be through offering better or more accessible education; increasing public safety by improved policing; building more hospitals to meet growing demands in healthcare; or increasing the number of affordable homes for new families, for example. In order to achieve this, resource and funding must be secured, and policy and strategy may need to be altered based on the needs of given areas.

This is where the Indices of Deprivation (IoD) play a key role. These Indices are a set of measures that compare relative deprivation across England for the 317 Local Authorities and 32,844 Lower Super Output Areas (LSOAs – also known as “small areas” or “neighbourhoods”), enabling a method to rank these areas from relatively most deprived to relatively least deprived. This is done across 7 domains – Income, Employment, Health, Education, Living Environment, Crime, Barriers to Housing & Services. These 7 domains are then weighted and combined into a single rank or score for an area, to form the Index of Multiple Deprivation (IMD). 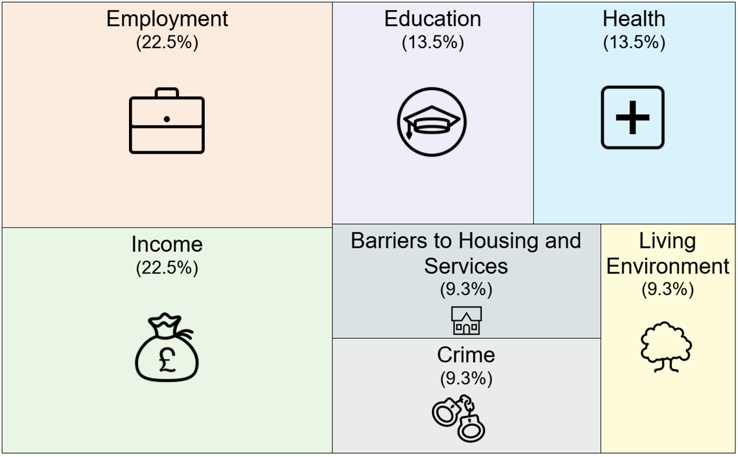 Figure 2 – The 7 domains that are combined to form the IMD, including weighting

In this article, we will consider how the Indices of Deprivation are currently used, and why this gave us, Concentra Analytics, an opportunity to develop an IoD analytics platform more powerful than anything else out there to date. Using Tableau Software, and working in collaboration with the Public Sector Community, Kirklees Council and Surrey County Council, we sought to understand what was truly required by Public Sector organisations, with the ambition to produce the most insightful suite of public dashboards currently available. 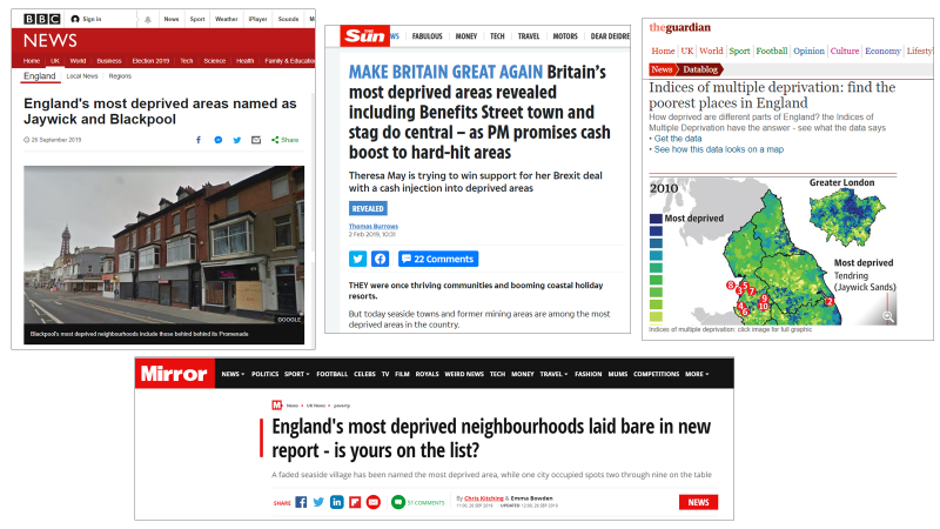 There are three main pitfalls with the current situation.

The IoD data is updated and released to the public only once every 4 or 5 years, so it is eagerly awaited by the Public Sector and the press, leading to a flurry of outbound content post-data release. The press need to get their content published while it’s a hot topic, and Public Sector organisations want to show they are reacting. This results in a huge quantity of analysis, often lacking depth and quality, in order to act within a short time frame.

Tabloids aim to bring shocking, high impact stories to hook readers. Headlines such as “Find the poorest places in England”, or statements such as “Blackpool is deprived” are inaccurate. The IoD is not a measure of poverty or affluence, but it is often mistaken for this. Nor is it a measure of absolute deprivation: if compared to locations in many developing nations, you would be unlikely to classify Blackpool as deprived. What it does enable is a rank across these areas in comparison to each other. We are therefore able to say “Blackpool is relatively the most deprived area in England”, according to the IMD. We can also dig a little deeper and determine which area is relatively most deprived when considering each of the 7 domains (e.g. education or health).

Complication 2: Changes in metrics and geographies between releases

The second issue is that the underlying metrics that are combined to create the IoD can change each year, as do the small areas (some split, others merge). This makes it extremely difficult to compare change in relative deprivation over time, or monitor the impact of new policies and strategy, therefore very few have attempted it. To do this, the IoD must be recalculated accurately against the new census boundaries, or it is outdated and therefore a misrepresentation.

The third issue is probably borne of the above two. Due to the frenzy when data is released, organisations complete much of the same type of analysis, for very similar purposes, resulting in a huge amount of duplicated effort.

This piece of work emerged due to our awareness of the issues with the current situation, with the ambition to overcome as many of them as we could.

We developed a sophisticated method to compare the latest data to previous releases accurately, by aligning historic data for 2010 and 2015 to 2019 census boundaries, while also considering changes to underlying metrics (Complication 2).

Using a platform such as Tableau, we were able to complete much of the analytics and data processing in advance of the data release, catering for changes to areas and metrics as soon as the information was published, making it as close as possible to a case of “plug and play” on the day. There were, however, still plenty of final changes to make, resulting in a publication of the dashboards 36 hours after data release. We achieved one solution that could be used by many, reducing duplication of effort (Complication 3). This is vital in a field where funding and resources are limited.

It is difficult to overcome Complication 1 (particularly when considering how the press currently report on the IoD). However, by providing an analytics platform available to all, we hope that Public Sector organisations can use it to perform accurate analysis, as well as using it as a platform to focus on priority areas from a more informed position, in order to develop further local insight. We believe this can lead to more effective decision-making regarding allocation of resources as well as instructing meaningful policy change.

Read on for some examples of the possible insights gained using these dashboards, which can be found here in Tableau Public’s Viz of the Day Gallery.

Starting by considering the IMD rank* of Local Authorities within a single year, we can see that in 2019, Hart was the relatively least deprived Local Authority and Blackpool was the most deprived.

*This is technically a “rank of average rank” – which will be explained later. 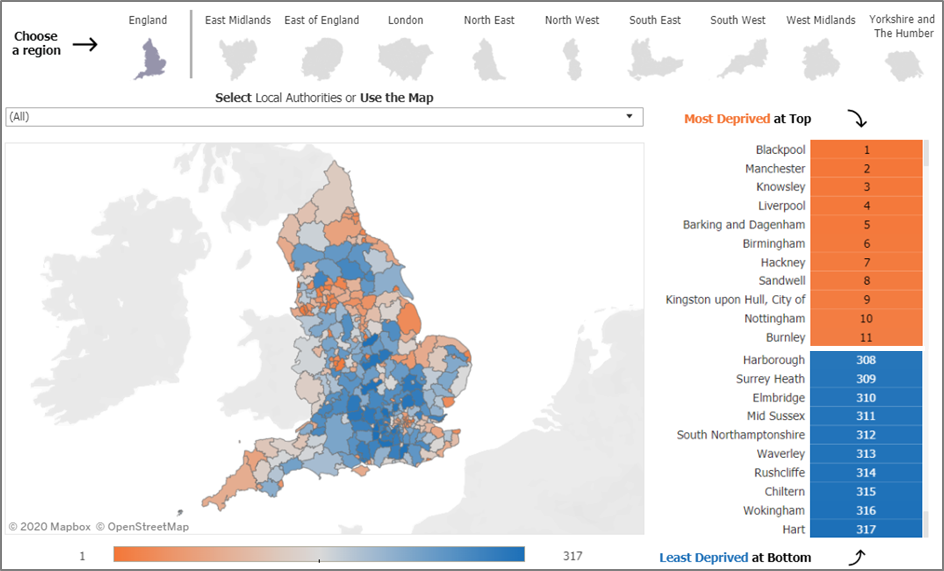 However, where the dashboards add more powerful insight is when looking at change in relative ranks over time. For example, the below screenshot shows that since 2010, Isles of Scilly is the relatively most improved Local Authority, increasing its IMD rank by 113 (out of 317), whereas, Spelthorne has seen the opposite trend, with its IMD rank decreasing by 53 (greatest change in the period).

This might enable a public sector organisation, to see how their initiatives may have influenced these ranks or allow them to follow suit where particular policy changes by other organisations have resulted in positive change. The dashboards are not limited to this purpose though – this might also allow a young family to understand how an area is changing in terms of education or housing, when considering purchasing a new home, for example. 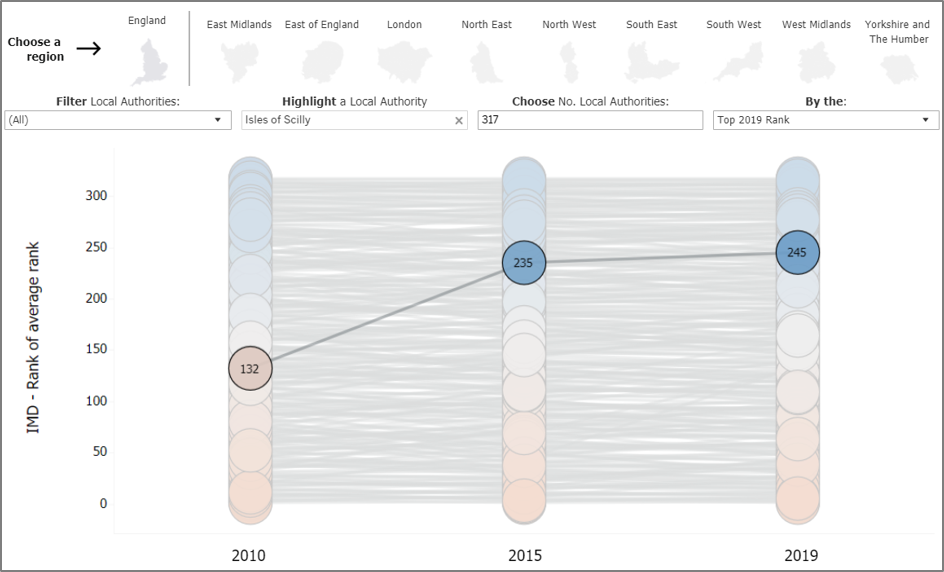 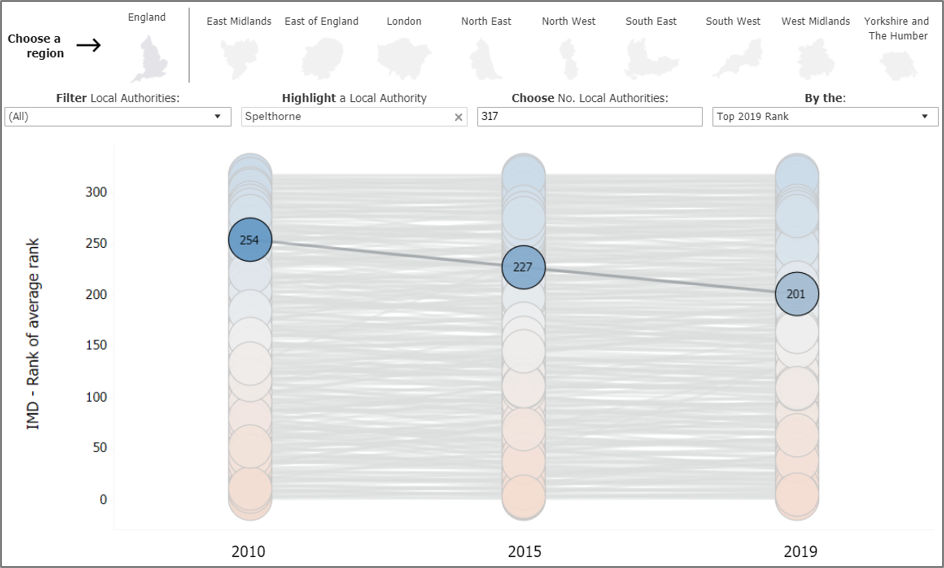 Furthermore, we are able to select a Local Authority of interest and see how each domain contributes to the overall IMD score or rank. Taking Blackpool as an example, below we can see that it ranks highly (high relative deprivation) across all domains, except for “Barriers to Housing and Services”, where it ranks at 308 out of 317. Therefore, when considering factors such as homelessness, housing affordability, and distance to a post office, primary school, shops and a GP surgery, Blackpool is only 9 places away from being the relatively least deprived Local Authority in England. 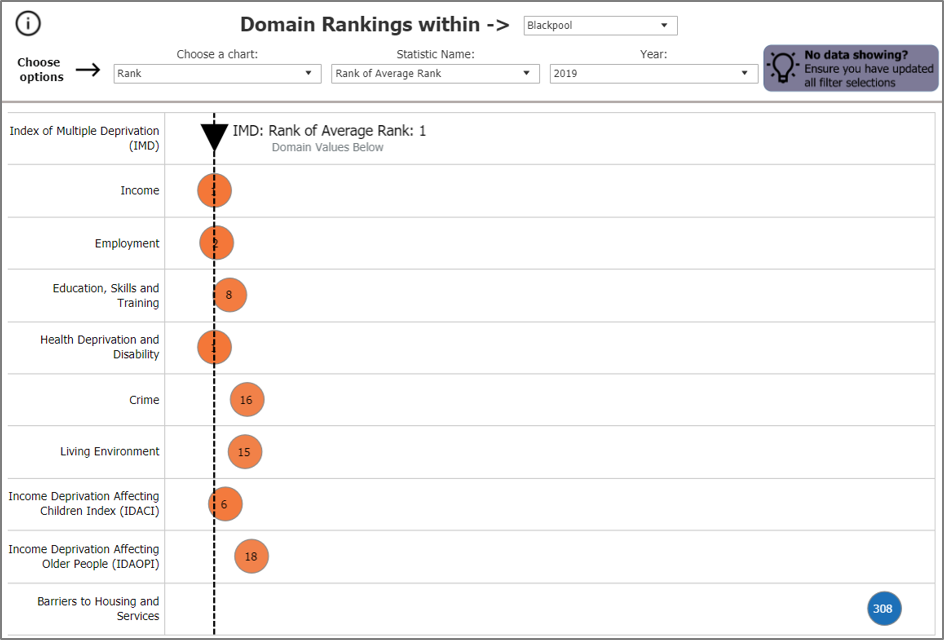 We can also see how this is distributed across deciles† for the 94 LSOAs (small areas) within Blackpool in the screenshot below. 45% of LSOAs in Blackpool are within the most deprived 10% (decile) of all LSOAs in England, and 96% of LSOAs are in the most deprived 50% of all LSOAs in England. However, when considering the “Barriers to Housing and Services” domain, almost all (92 out of 94) LSOAs are in the least deprived 50%. This also indicates how aggregating data can hide certain extremities.

† An explanation of “deciles”: deciles are used to divide a sorted population of data into 10 equal bins. For example, if you had 100 apples and lined them up in order of weight, the first decile would be the lightest 10% of your apples by weight (so apples 1 to 10) and the 10th decile would be the heaviest 10% of apples by weight (or apples 91 to 100). 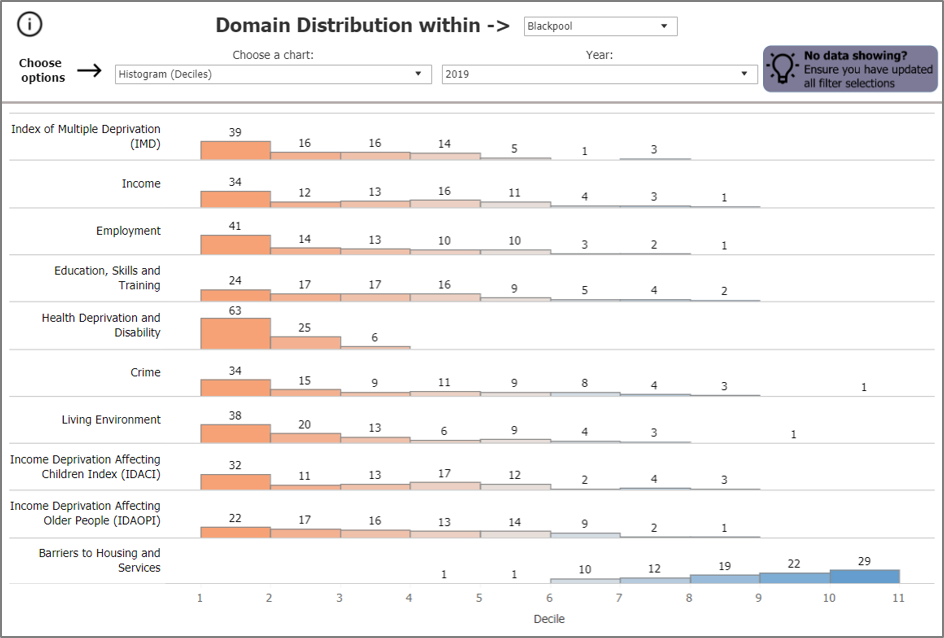 Figure 9 – Distribution of LSOAs within Blackpool by IMD and Domains

We also have the flexibility to view any dashboard for a specific domain (let’s consider “Barriers to Housing and Services” again) across a number of statistics (e.g. average rank, rank of average rank*, average score, or by % of LSOAs in the most deprived 10%) for a given year (2010, 2015 or 2019), while also being able to filter to a chosen region by clicking on a relevant icon. The below screenshot shows the rank of average rank for the “Barriers to Housing and Services” domain only, where again we can see Blackpool ranks at 308, one of the least deprived Local Authorities in England for this domain. 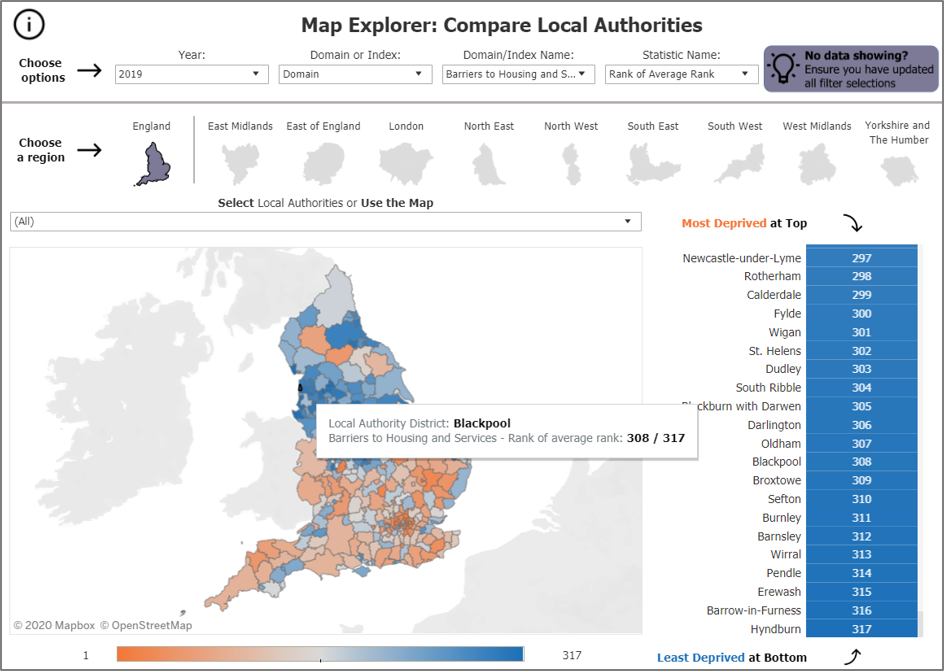 This article only starts to scratch the surface of the potential for these dashboards through a handful of examples. Having said this, we were not aiming to provide all the answers for local areas in England. This is something that can only be achieved using local knowledge, considering local needs, policy and strategy. The ambition is for the dashboards to provide a starting point for organisations to continue further custom local analysis quickly and accurately in order to facilitate positive change.

Why not use your postcode in the “Find your LSOA” feature (via the homepage) to explore analysis for your area? Access the dashboards here.

For a deep dive into our approach, join us for our 3-part webinar series, launching on Tuesday 25th February, in collaboration with Tableau. Register your free place here.

WEBINAR: Converged Infrastructures – Brought to you by Advancis & Total ...