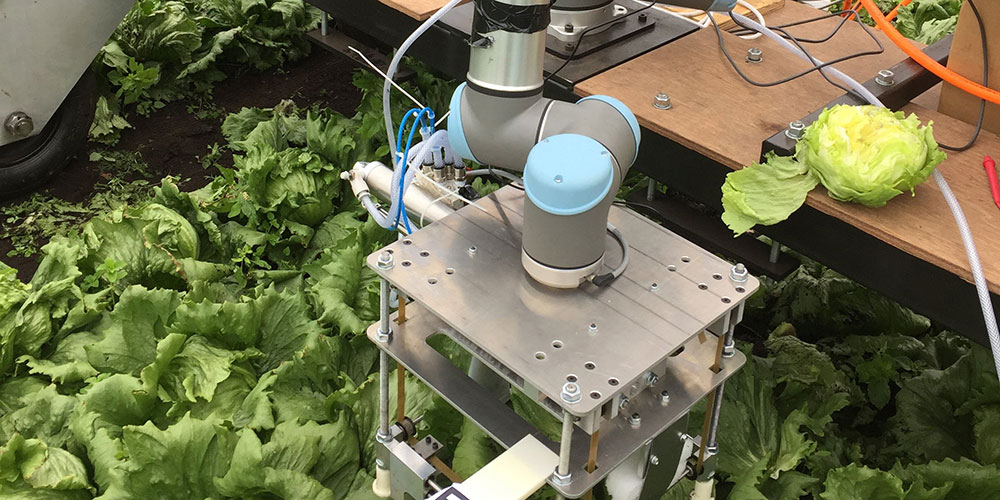 Engineers have developed a vegetable-picking robot to complete the challenging task of harvesting lettuces.

The prototype Vegebot, developed by a team at Cambridge University, is nowhere near as fast or efficient as a human worker at picking iceberg lettuces.

But research published in The Journal of Field Robotics suggests progress in harvesting the easily-damaged lettuces, which grow relatively flat to the ground, shows the use of robotics in agriculture could be expanded in future.

Crops such as potatoes and wheat have been harvested mechanically at scale for decades, but iceberg lettuce, the most common type of lettuce grown in the UK, has resisted automation.

The Vegebot was initially trained to recognise and harvest iceberg lettuces in a lab setting and it has now been successfully tested in a variety of field conditions in co-operation with a Cambridgeshire grower.

“Every field is different, every lettuce is different,” said co-author Simon Birrell, from Cambridge’s Department of Engineering. “But if we can make a robotic harvester work with iceberg lettuce, we could also make it work with many other crops.”

The Vegebot first identifies the target crop within its field of vision, then determines whether a particular lettuce is healthy and ready to be harvested. Finally, it cuts the lettuce from the rest of the plant without crushing it so that it is “supermarket-ready”.

Co-author Josie Hughes said: “For a human, the entire process takes a couple of seconds, but it’s a really challenging problem for a robot.”

The Vegebot has two main components: a computer vision system and a cutting system.

The overhead camera on the Vegebot takes an image of the lettuce field and first identifies all the lettuces in the image, and then, for each lettuce, classifies whether it should be harvested or not.

A lettuce might be rejected because it is not yet mature, or it might have a disease that could spread to other lettuces in the harvest.

The researchers developed and trained a machine-learning algorithm on example images of lettuces.

Once the Vegebot could recognise healthy lettuces in the lab, it was then trained in the field, in a variety of weather conditions, on thousands of real lettuces.

A second camera on the Vegebot is positioned near the cutting blade, and helps ensure a smooth cut.

The researchers were also able to adjust the pressure in the robot’s gripping arm so that it held the lettuce firmly enough not to drop it, but not so firm as to crush it.

The force of the grip can be adjusted for other crops.

“We’ve still got to speed our Vegebot up to the point where it could compete with a human, but we think robots have lots of potential in agri-tech,” said Ms Hughes.

Co-author Julia Cai said: “At the moment, harvesting is the only part of the lettuce life cycle that is done manually, and it’s very physically demanding.”

In future, robotic harvesters could help address problems with labour shortages in agriculture, and could also help reduce food waste by being trained to pick only ripe vegetables.

Robotics and AI to free up 5.7 million hours of GP time...

IoT, AI and robotics to support people living with deme...