The Cost and Benefit Analysis of Prefabricated vs Traditional Data Centres 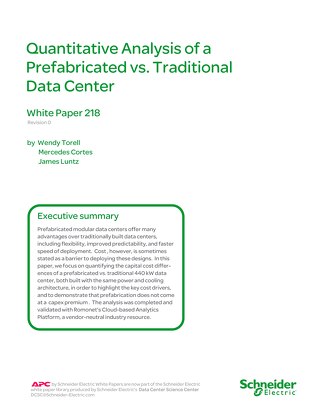 Prefabricated modular data centres offer many benefits including flexibility, predictability and speed of deployment. Cost can be seen as a barrier, but a systematic comparison provides detailed insights into the variance in capital expenditure between a prefab and a traditional purpose-built data centre.

Prefabricated data centres are growing in popularity, especially for smaller Edge of Network installations thanks to the proven benefits of speed of deployment and scalability. The provision of ever more reliable reference designs and customisable, pre-assembled and factory-tested modular building blocks further enhances their appeal.

The ability to match the size of a data centre to the immediate load required, with the ability to expand or add capacity as necessary, is a strength of adopting the prefabricated approach. However, the issue of capital expenditure (CAPEX) can be confusing with opinions divided as to whether prefab implies a more expensive outline investment than a traditional approach for a data centre design and build.

A new White Paper from Schneider Electric, a global specialist in energy management and automation, WP #218 ‘Quantitive Analysis of a Prefabricated vs Traditional Data Center’, offers insight into the complexities of the issue by using a systematic comparison of the capital costs involved in building two data centres with identical capacity, levels of redundancy, power and cooling architectures, density and number of racks; one built using prefabricated modules and the other built by traditional methods. By isolating the capital costs from other variables, the paper allows a direct comparison between the two approaches to be made.

CAPEX costs include those associated with materials, design site preparation, equipment installation and commissioning. The paper analyses two 440kW data centres, each based on a documented reference design. Both installations used the same major components such as UPS systems, chillers, racks and rack power-distribution units (PDUs).

In each case the space consisted of 44 IT racks each capable of supporting an average of 10kW/rack of IT load. Hot aisle containment was used to optimise airflow in the space, whilst the exact arrangement of racks, coolers and PDUs varied between the two designs. For the prefabricated centre, two dual-bay IT modules were used whereas the traditional centre comprised a single large IT room containing all 44 racks and the supporting infrastructure.

Third-party data centre modelling software from Romonet was used to perform the capital cost comparison. Assumptions were made, for a given location, for the cost of labour and for the difference in price between vacant land (for the prefab) and finished building space for the traditional data centre.

Materials for prefabricated data centres cost more as they are shipped with physical structure pre assembled and include the physical housing or containers as well as the factory integration work. The largest material premium for the prefabricated approach was for the IT room, followed by the cooling system.

On the other hand, onsite labour for prefab is cheaper as most of the integration work has already been completed in the factory. The cost of space, determined largely by the difference between vacant as opposed to developed real estate, represents a big saving for using a prefabricated solution.

Sensitivity analysis reveals that there are two key variables affecting the capital expenditure, namely building cost and average power density/rack. At higher densities the savings achieved by using the prefabricated approach increase as more load can be housed in the same fixed module space. As density decreases, more modules are needed to house the same IT load and so the additional material overhead diminishes the savings.

For the example studied, capital costs were found to be 2 per cent cheaper overall for the prefabricated approach with lower space and labour costs offsetting the greater material cost incurred.

The study concludes that there are many variables to be considered when assessing the capital costs of either approach and so each deployment should be considered on its particular merits.