Right-sizing UPS systems is the right way to achieve efficiency 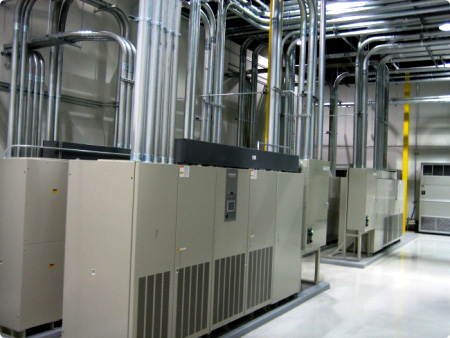 The primary function of a UPS system is to guarantee the power supply to its load in the event of a loss or interruption to mains power. All other considerations are secondary.

However, one trade off that must be taken seriously is the energy efficiency of the power system; with enough power supply and battery redundancy, you can guarantee server uptime as long as you don’t care about the power overhead. But for a variety of reasons, energy efficiency is something you must always care about.

The first reason, of course, is operating cost but another consideration coming down the tracks is the environment. The European Commission is in the process of drawing up a set of Product Environmental Footprint Category Rules (PEFCR) aimed at limiting the environmental footprint of data centres as part of its overall environmental protection plan. Of particular interest to the data centre group is the performance of power supplies in general and UPS systems in particular. As a result European UPS manufacturers including Schneider Electric, Emerson, Eaton and Socomec are working on designing universal UPS technologies that maximise availability, efficiency and capacity within data centres.

Whatever the fruits of these developments, those seeking to maximise the energy efficiency of their data centreshave a number of factors to consider. For a typical data centre, the UPS technology of choice is the double-conversion online UPS. For power ratings of 10kVA and higher it provides the best levels of availability with instantaneous switch-over to battery backup in the event of a power outage. The trade off for double-conversion models is the energy efficiency which is always affected by virtue of the fact that the battery is continuously being charged.

For that reason many double-conversion UPS systems offer an Economy-mode or EcoMode of operation in which a manual bypass switch overrides the double conversion path and connects the load directly to the mains input. The UPS is now functioning in the same manner, effectively, as a simple standby UPS, in which the battery and its DC-AC inverter are only deployed in the event of a serious disruption to the mains supply.

This results in improved efficiency—between 98 and 99%, as compared with the 94 to 97% efficiency typical of the base UPS—but at the expense of sacrificing security as there is a time lag, however small, between detection of a power problem and switching over to the inverter and battery backup. For mission-critical, 24*7 data-centre operation, even such a small time lag may be critical.

UPS manufacturers have responded by introducing a new class of machine called generically Advanced EcoMode. Technologies vary but in the case of Schneider Electric, its Galaxy VM UPS uses a layout in which the inverter, instead of being bypassed as is the case in standard EcoMode, now runs in parallel with the bypass source, supplying the reactive part of the load and maintaining an input power factor close to unity. Now, the load is never exposed directly to the mains, as in EcoMode, so security is restored to its maximum level.  Switch-over from mains to running off the inverter only is instantaneous, and the output voltage is complaint with IEC 62040-3 Class 1, as compared with EcoMode’s class 3.  There is a trade off, inevitably, of a small drop in efficiency.

The trade offs with economy mode, advanced or otherwise, can be simply expressed: run the double-conversion UPS in normal (ie non-economy) mode and enjoy guaranteed protection at the cost of low power efficiency; invoke economy mode and reduce power while sacrificing some protection; or deploy advanced economy-mode which offers something in between.

In reality, a better option for maximising efficiency and guaranteeing uptime is to deploy modular and scalable UPS systems so that the power supplied, including backup, is matched more closely to the load at any one time. Traditionally, it has been the practice to specify UPS systems to a rating appropriate to the maximum occupancy of a data centre, not the actual IT loads that it will face in practice.

A modular system such as the Symmetra PX range from Schneider Electric allows you to adopt a “right-sizing” approach. Instead of starting of with a 100KVA static UPS to guard an initial load of 20KVA, you can add power and battery modules as required. In this way you can supply full redundancy while maintaining energy efficiency because you are only deploying the power capacity you need. As the load increases, you can simply add extra modules to meet the new capacity.

With a modular double-conversion online UPS approach it is possible to square the circle of guaranteed uptime and improved efficiency.