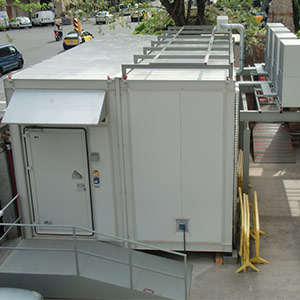 Edge Computing, or the decentralisation of large data centres to smaller so-called Micro Data Centres, is a trend that is emerging in response to a need to manage internet traffic more effectively.

With the rapid growth of data volume driven by a number of factors including the proliferation of smaller and more powerful access devices such as smart phones and Tablets, and the emergence of the Internet of Things, there is an increasing desire to have access to this data regardless of location or viable network.  In order for users, companies, municipalities and machinery to access, transmit, or process the data, they need it to be available on-demand at their location.

With the increasing dependence on cloud technologies, systems requiring real-time feedback may be limited by latency and available bandwidth. This is driving the need to localise the compute power closer for processing of the more critical applications immediately and manage the less critical applications in the cloud.

As a consequence, equipment vendors have designed prefabricated data centre solutions which allow relatively small data centres (micro data centres) to be deployed rapidly to any location. These comprise the infrastructure necessary for a data centre including racks, power supplies, cooling equipment and containment. They are factory engineered, pretested and certified to ensure rapid deployment and reliable operation.

One consequence of the development of prefabricated micro data centres is the opening up of a specialised niche in which they are proving to be extremely beneficial, namely that of ruggedised data centres for harsh environments inherently hostile to computing equipment. These include the military, where robustness has always been a requirement, and the industries concerned with the exploration and extraction of natural resources for energy production such as oil and gas drilling or mining.

Almost inevitably such exploration, and subsequent extraction, takes place nowadays in remote and/or hostile environments—on offshore rigs or near mines, in regions with extremely hot or cold climates or areas of know seismic activity—and at a time when advanced technology is becoming ever more important. As with any modern industry new technologies and applications are becoming available to help in accurate and efficient discovery of natural resources, bringing with them an increased requirement for information processing capability.

The challenge of how to deploy such applications in the oil and gas industries is a significant one. Typically, such information processing requirement has been delivered from established data centres.

But given the remote location of many exploration sites and the attendant paucity of communications infrastructure, this requires large and expensive data connections via satellite which also make operations vulnerable to delays or downtime.

By way of example, an oil-exploration site in Angola entailed the collection of large amounts of data which had to be processed to generate 3D colour images for geologists to evaluate potential drilling sites. It took an average of two days to attain processed data but the satellite link necessary to connect to the remote corporate data centre cost $200,000 per month. The cost advantages of deploying a local data centre were obvious.

However, the deployment of small traditional-built data centres on sites such as this has typically posed problems given the availability, or lack of availability, of local expertise, equipment, spare-parts inventory and support.

Fortunately the momentum generated by demand for Edge Computing is producing the sort of prefabricated and validated micro data centre that can, with suitable modification, be ideally suited for harsh and remote environments.

Many of the features of prefabricated micro data centres deployed in ordinary business situations are a prerequisite for those deployed in harsher environments. They are built in modules that are pre-engineered, pre-assembled, integrated and pre-tested in a factory environment, then transported to the remote location as a single structure without the need for individual component delivery.

In addition, the containers in which they are housed can be ruggedised and sized for the sort of working conditions likely to be encountered. Corrugated steel containers, meeting strict ISO standards can be made highly portable and suitable for applications that require ease of transportation. This type of manufacturing and delivery also virtually eliminates the compatibility issues presented by using components supplied and shipped from multiple vendors and manufacturers.

Additionally, the risks associated with on-site assembly, installation, integration, such as human error, are alleviated, resulting in a faster and more reliable deployment. In fact, when compared to traditional “stick-built” facilities, the use of standardised, pre-assembled and integrated data centre facility power and cooling modules can be 60 percent faster to deploy.

The use of prefabricated modules can also simplify management and maintenance once the building process is complete. Standardised in-factory design and manufacturing are closely coupled to greatly minimise uncertainty, resulting in more predictable performance of the data-centre infrastructure, minimised risk, and simplified maintenance operations. This is a critical benefit for oil and gas businesses where personnel often work on rotation cycles and just minutes of downtime can result in the loss of millions of dollars.

Harsh and industrial environments often present unique challenges for data centre deployments.  One example of this is a cold-climate data centre delivered by Schneider Electric to a potash mine in Canada. As well as needing to operate in extremely cold temperatures it had to withstand more than 1m of snow on the roof and also protect the equipment from an extremely corrosive environment.

The 80kW data centre was built using 20ft containers with structural reinforcement to bear the weight of the snow. Inside, it had a vestibule layout to guard against corrosion. This provides an air-lock entry system comprising a set of inner and outer doors, which open in an alternating pattern so that only one is open at anyone time. In this way the air in the compartment housing the IT equipment is isolated from the surrounding atmosphere, thereby preventing contamination.

Another example of deploying a data centre in a unique environment was that of one supplied by Schneider Electric to a Chinese University which operates the primary laboratory for the State Marine Environmental Science Department. Most of its operations take place at sea on a research ship. The ship needed a small on-site server room to collect massive amounts of data and process it in real time anywhere in the world.

The solution comprised a 20ft All-in-One container containing a single rack for UPS equipment and two IT racks. The container was treated with a corrosion resistant finish  and fitted with a rack-glide system with seismic supports top and bottom to withstand shocks and the wave motion encountered on a ship.

Ruggedised, prefabricated micro data centres present a new level of innovation, providing users with the agility needed to deploy application specific business critical technology in the harshest of environments. These modern localised computing solutions can be delivered to the most remote and inhospitable locations with resilience, reliability and cost effective data processing. Responding rapidly to emerging  and ever-changing business requirements.