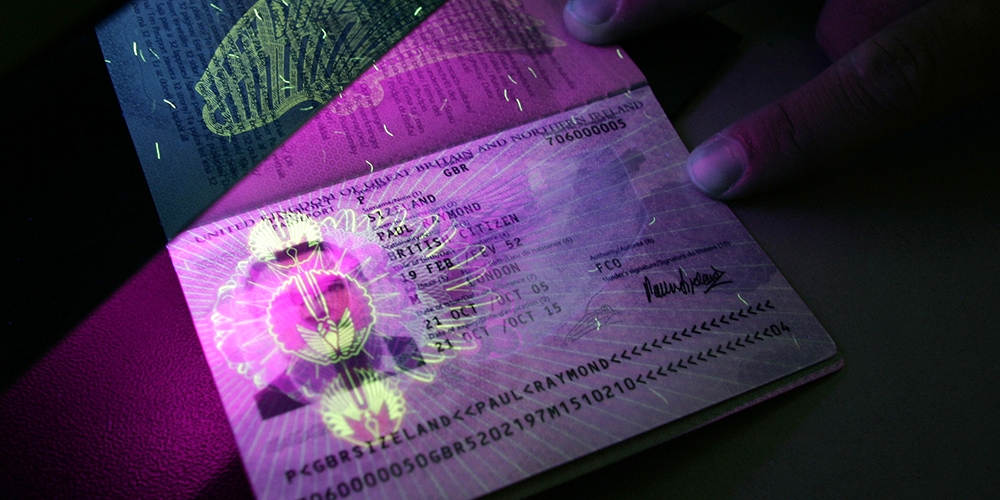 On its face, a passport is little more than a booklet barely the size of a greeting card. But it’s a powerful tool, facilitating movement across borders, and for some, serving as the most reliable proof of identity and nationality.

The hidden technology in the design and manufacturing of a passport often goes undetected by millions of tourists and travelers every day as they pass through customs.

The fact is that your passport features are meticulously planned and every passport that is printed has a stack of security features. Forgery and identity theft are real-world issues that plague customs officials all over the globe.

The US Government Printing Office is the official issuer of passports for American nationals. Your passport contains 30 security features and is made with 60 different materials. Let’s look at some of the most important security tech featured in your passport.

The Holograms in your Passport

Holograms have been used in passports for the last two decades or so. The UN first issued them on their passports in 1984 and countries were quick to follow suit.

While holograms are a complex design technology, they can still be forged. Counterfeiters have taken to corners of the dark web to sell fake holograms for use in forged passports. However, hologram tech is improving and recent renditions of holograms are layered with security details over your biographical information.

The chemicals used in thermochromic inks and how they respond to the paper makes up a key feature of passport security. These inks change color, disappear and reappear depending on the light they are displayed in and the angle of reflection. Paper is another security component and it can contain fluorescent particles that glow under UV light. Most of these features go completely unnoticed by the average traveling citizen but are carefully scrutinized by passport control officers.

Font & Printing – The Most Challenging parts of Counterfeiting a Passport

The art of security printing is a multi-billion dollar business that has its roots embedded as far back as the medieval ages. Master engravers spend decades honing their craft to learn what’s needed in manufacturing a die set. Microprinting and nanoprinting techniques are also used in the die engraving process and some patterns can be as fine as one micron.

Forgers have the hardest time replicating fonts over any security feature. Government fonts are held securely in data vaults that are impenetrable. The only way a forger can exactly match a font would be to break into the secure database, a highly unlikely scenario.

Where do Chips Fit in?

RFID chips, installed in passports, are a controversial topic of discussion with many people. Some think it is already an outdated technology that exposes your personal data to fraudsters. RFID chips and the machines that code them are freely available on the internet and easily modified and used to recode fake chips.

There’s an Easier way to Acquire a Second Passport

Did you know that you no longer need to be restricted by your nationality? With a CBI program, you have the ability to acquire a second passport and travel anywhere you like with visa-free access.