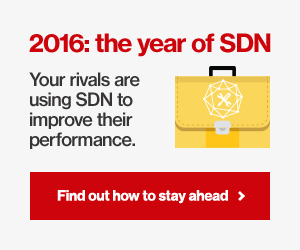 Businesses are increasingly using SDN to solve their real-world problems

Software Defined Networking (SDN) has gone mainstream, with 10,000 enterprises predicted to be using the technology by the end of 2016, a 10-fold increase in just two years.

There has been no shortage of talk – even hype – around SDN, but businesses are increasingly using it to solve real-world problems. From improving networks to enhancing competitiveness, 2016 is already seeing new and exciting uses for SDN.

This matters. The pace of change is increasing all the time, and who succeeds and who fails will be determined in part by how successfully businesses embrace digital transformation. Being SDN-ready is central to that.

But SDN is not just about preparing for the future: it brings real and measurable benefits today.

In a new whitepaper we identified four main challenges for which SDN is being used as the solution.

There are many ways in which SDN can help reduce costs. To take just one example, the amount of bandwidth enterprises consume is growing constantly as the number of devices increases, more work moves to the cloud, and the data requirements of individual applications rises. At the same time, IT departments are coming under pressure to reduce costs, particularly in APAC where bandwidth is more expensive than the US.

SDN enables usage-based pricing, with enterprises increasing or decreasing their bandwidth in near to realtime. Rather than paying a set price for an amount bandwidth that may be underutilized much of the time, you pay only for what you consume.

In our experience complaints over poor performance almost always come down to a lack of sufficient bandwidth. Usage-based pricing doesn’t just let enterprises reduce costs by turning off unused bandwidth, it lets them increase it when they need better performance, again in near real-time. That could mean increasing bandwidth in as little as 15 minutes during times of unexpectedly high demand, or it could mean scheduling regular planned increases, such as to accommodate a weekly telepresence meeting.

Traditional IT can act as a roadblock to the need for businesses to be more agile. Ordering, shipping, installing and configuring new hardware can take weeks or even months, when the business really needs to react in a matter of days or even hours.

SDN virtualizes many hardware functions, allowing them to be installed and configured remotely. Added security and new functionality can be ordered through a self-service portal and require no more hardware than a simple server, allowing IT to respond to the needs of the business in just a fraction of the time it would have taken in a pre-SDN world.

SDN allows businesses to design workflows in the most efficient way, then allocate IT resources accordingly. In other words the design is dictated by the business, not the network. We are already seeing some exciting new ways of thinking about doing things, with 69% of enterprises already saying they have reengineered business processes using cloud.[i]

The need for change

The pace of change is accelerating, and successful adoption of SDN is crucial to competing effectively. Only by building flexibility, scalability and agility into your digital transformation will your organization truly be able to collaborate, communicate and succeed.

Click here for further reading, infographics and an infopaper